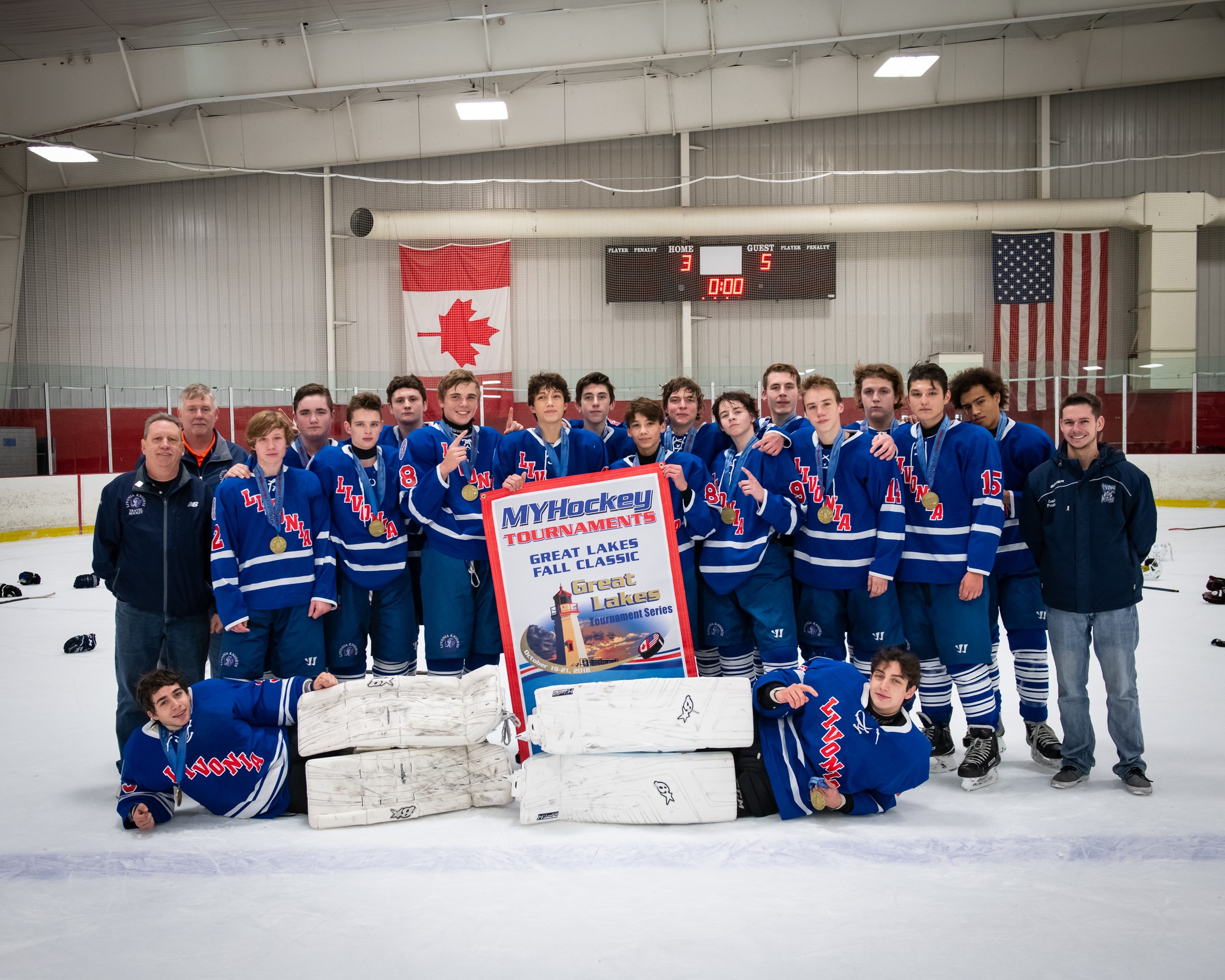 The Midget A Livonia Knights headed to Holland Michigan for the Great Lakes Fall Classic on October 19th-21st.  After a up and down start to the season, the coaching staff was buoyed by the teams modest 2 game winning streak to start league play prior to the tournament.

The goal going into the tournament was to play well enough to play the maximum games that weekend along with some team bonding on the road.  The coaching staff’s advice of 1 shift and 1 game at a time played out splendidly over the weekend.

Friday night’s tournament opener saw the Knights facing off against the Lansing Spartans. The Knights struck quickly just 1:13 into the game as Sean Massa converted a nice feed from Jack Siroky.  The second period saw goals from Jack Swamba(Unassisted) and Garrett McKenzie(Massa) as the Knights dominated in both zones.  As the 3rd period began the coaches challenged the Knights to keep the pressure on the Spartans. A relentless attack saw the Knights light the lamp 3 more times with goals from Joey Coulter ( Ryan Kerr), Sean Massa (Adam Lumani, Swamba) .The final goal from Jack Siroky, who was just back from a shoulder injury, was his first of the season with an assist going to Trevor Swazey.  The final score was 6-0 with the shutout going to Joe Stone.

Saturday’s first game was against the Joliet Jaguars and the Knights were reminded of the importance of continuing their strong start from Friday. It was a penalty filled period for the Knights as they had to kill off four minor penalties.  Adam Lumani broke the deadlock tipping a shot from the point by Troy Augustine. That goal was quickly followed by the first of three goals from Jack Siroky (Swamba). The second period featured goals from Riley Heath ( Dustin King) and Sean Massa (Jackson Hinkle).  The onslaught continued as the Knights lit the lamp five times in the third.  Jack Siroky(McKenzie/King) scored a minute into the third period . The lamp then got turned on by Jack Swamba(McKenzie/Anthony Quattro), Massa(Heath), Siroky (Hinkle, Heath) completed his hat trick and then Swamba scored at the buzzer off a beautiful pass from Siroky. The final score was 9-0 with the shutout going to Joe Stone.

Saturday’s second game against Wheaton West (Illinois) was a tight game and although the Knights dominated the game, it ended in a 1-1 tie as Ryan Kerr scored a unassisted goal midway thru the second period to give the Knights a 1-0 lead. Wheaton tied the game minutes later scoring at the end of a power play opportunity.  Goaltender Lane Schroeder was his usual solid self and turned away several solid scoring chances from Wheaton players.

The Knights had revenge on their minds for Sunday morning’s semi-final game against the same Wheaton West team.  The first period ended in a 0-0 tie with shots and time of possession heavily in the favor of the Knights.  The second period proved to be the difference and the Knights struck quickly. Just 1:10 into period two, Massa scored a unassisted goal to give the Knights the lead.  Livonia struck just 8 seconds later when Joe Braschwitz (Lumani) scored his first goal of the season.  Wheaton quickly called a timeout to settle their team. The Knights kept the pressure on and three minutes into period 3 Anthony Quattro (Hinkle) scored from the point to make it a 3-0 Knights lead.  Wheaton scored a goal during a 2 man advantage to close the gap, but the Knights prevailed and moved onto the Championship game.  Lane Schroeder was outstanding in net and turned away several good Wheaton scoring chances.

Sundays Championship game was against the Toledo Chiefs who are a split season Midget A team made up of high school players.  The Knights struck quickly just 1:30 into the game as Garrett McKenzie walked the opposing center on a offensive zone faceoff and went top shelf to light the lamp.  Toledo struck a minute later to knot the game at 1. Just five minutes later Dylan Statham (Massa) scored his first of the season to put the Knights up 2-1. Massa (King/Hinkle) then scored five minutes later to put the Knights up 3-1 to end the first period.  Toledo would score the lone goal of the second frame to pull within one and set up a furious finish to the Championship game.  Once again the Knights struck quickly as Jack Swamba scored a unassisted goal just 1:26 into period three which proved to be the game winner.  Sean Massa (Griffin Conley) finished off the Chiefs with a empty net goal with:06 left on the clock to seal the win for the Knights in the Fall Classic Championship.  Final score Knights 5- Chiefs 3

Every player on the Knight’s roster contributed a point this weekend and the goaltending was outstanding all weekend. The tandem of Lane Schroeder and Joe Stone gave up a total of  5 goals the entire tournament.

It’s a pleasure to coach this hardworking group of kids whose team motto of:  Practice Hard, Play Hard, Win Easy paid off with a weekend Championship.

Thanks to all the Knight’s parents who organized team lunches, dinners and kept the players supplied with post game fruits, chocolate milk and Gatorades.  It takes a village to make a team successful.